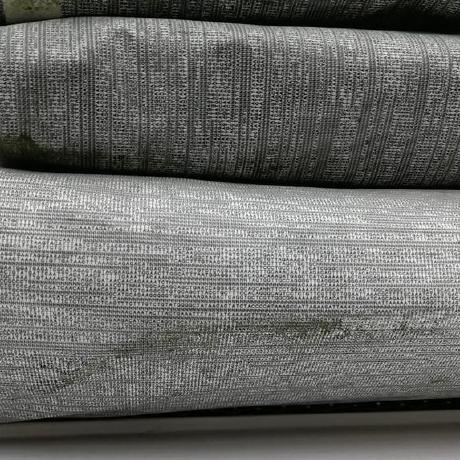 Ledger is a company selling hardware wallets for cryptocurrencies and Ledger Donjon is the team at Ledger doing security research on Ledger's devices and, more broadly, on the whole ecosystem of hardware wallets.

The Donjon CTF 2020 was held in November 2020. During the three weeks of this event, participants were asked to solve challenges in multiple categories related with cryptology and hardware security.

Izy Wallet, CryptoHackers and etbnetbhtr were the three teams on the podium at the end of the CTF. I'm rather proud to finally end up at the 8th place because I was doing this CTF alone where other participants may have worked as teams.

Since they are at the core of this challenge, here are reminders on mathematical concepts often used in cryptography. You can jump directly to the challenge solution if you already are familiar with them.

An elliptic curve is a mathematical object used extensively in modern cryptography. It is defined by an equation of the form \(y^2 = x^3 + ax + b\) (for some fixed parameters \(a\) and \(b\)), which means that every point \((x, y)\) that satisfies this equation lies on the curve. The most common representation of an elliptic curve looks like this: 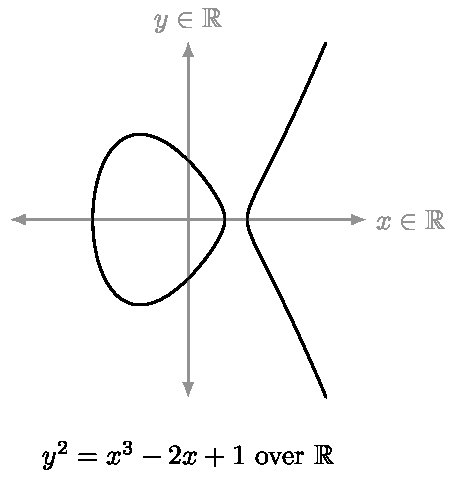 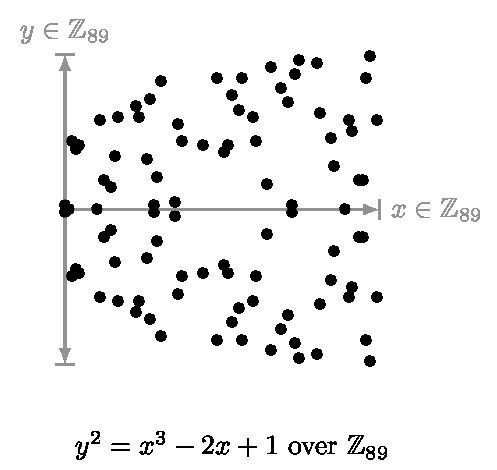 Now that we have defined a set of "special" points amongst the \(p^2\) points (namely, those that satisfy the equation of the curve), we want to have a way to combine them: the point addition. A basic property of this addition is that adding a point \(P\) to a point \(Q\) gives a point \(P+Q\) which is also on the curve. Thus, just adding the coordinate is not the right approach in general.

In cryptographic applications using an elliptic curve the curve parameters \((a, b)\), a generator \(G\) of a cyclic group and its order \(q\) are given.

ECDSA stands for Elliptic Curve Digital Signature Algorithm. It is a digital signature scheme which purpose is to authenticate some data. A signature should be publicly verifiable and cannot be emitted without the knowledge of some secret.

ECDSA is based on DSA.

ECDSA is sensibly the same as DSA but it uses arithmetic in a group defined over an elliptic curve which makes the Discrete Logarithm Problem (given \(P\) and \(G\), finding \(k\) such that \(P = [k]G\)) harder than for modular integers.

SMPC stands for Secure Multi-Party Computation. In "classical" cryptography, an entity usually computes a function (encryption, signature, ...) on some data before sending it over a potentially untrusted or public channel. Secure Multi-Party Computations have a different setup: now we want a given number (strictly greater than 1) of entities being able to compute together a function on some data while communicating between them using an untrusted channel or at least while not having to trust individually each party.

As we will see, in this challenge the setup is the following: we have 16 entities and we want them to be able to collectively produce a valid ECDSA signature of some data only if at least 5 amongst them agree on doing so.

One requirement that is often needed in an SMPC setting is to be able to share a secret between a set of \(n\) parties such that \(k \leq n\) shares are needed to reconstruct the secret. One famous scheme achieving this was introduced by Adi Shamir and is thus called Shamir's Secret Sharing.

Shamir's Secret Sharing (SSS) is based on the following properties of polynomials:

For cryptographic applications, we will not work with real numbers but instead with the usual "integers modulo a big prime number". SSS for \(n\) shares with a threshold of \(k\) (at least \(k\) shares are required to reconstruct the secret) works the following way:

A lattice is yet another mathematical object. It is a structured set of vectors in \(n\) dimension with coordinates in \(\mathbb{R}\) or \(\mathbb{Q}\) where each vector can be represented as an integer linear combination of the vectors of a basis. In two dimension, a lattice will look like this:

The pink vectors together are a basis of the lattice: the pink points can all be reached by adding (or subtracting) an integer number of time the two basis vectors.

In the case, of a random basis as in the picture above, some problems can be harder than for a carefully chosen basis. For example, try to find the right combination of the basis vector to reach a point close to the origin. This is called the Shortest Vector Problem (SVP) and, with the right parameters (more importantly, in higher dimensions), it can be computationally hard to solve.

A non-trivial approach of this problem (and of some other problems on lattices) is to use an algorithm designed in the 1980s by two brothers Arjen and Hendrick Lenstra and by László Lovász. This algorithm is called the LLL algorithm and it is able to find a "better" basis (with shorter and "more orthogonal" vectors) of the lattice studied. In the lattice shown above, the LLL lattice reduction algorithm would lead to the following basis of the same lattice: 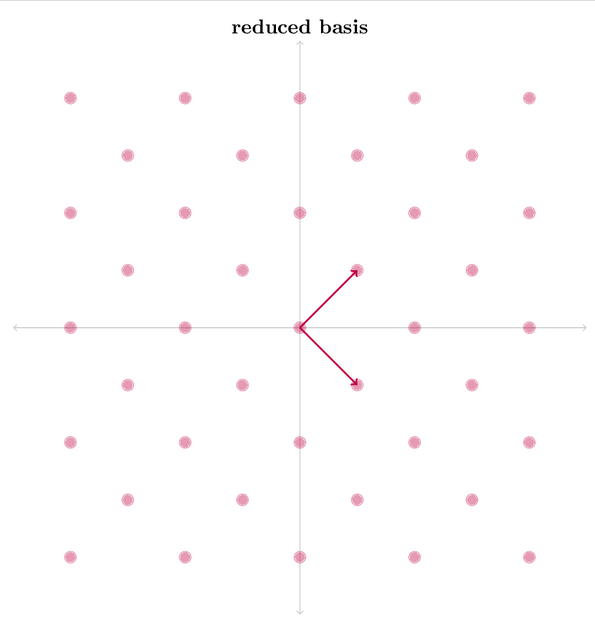 Having a basis with shorter vectors may be sufficient to instantly solve an instance of the Shortest Vector Problem or at least of its approximate version.

In fact, this algorithm is so powerful that it can also be used to solve other problems that seem at first unrelated to lattices. For example, with the right reformulation of the problem, LLL can be used to improve the search for a solution of some instance of the Knapsack problem.

Now that you know the basics of the concepts used, here is the challenge we were asked to solve during this CTF.

This challenge was the only 500-points challenge in the "Crypto" category. I managed to solve it before everyone else did and at the end of the CTF we were only four participants to have solved it.

Here is the description that is given to us:

As written in this description, we were given (very well-engineered) Python scripts that implements the Secure Multi-Party Computation of an ECDSA signature following the scheme described by Ross Pure and Zian-Loong Wang for Ren.

The scripts are split in three files:

As explained, to compute an (EC)DSA signature a value \(k\) must first be drawn. In the case of SMPC protocol used, computation must be done on \(k\), without any set of strictly less than 5 parties being able to retrieve its actual value. To do so, the following two functions are used:

In short, the random number generator works the following way:

The actual generation of the secret k is in reality a bit more complex. The function smpc_unbiased_rng is there to ensure that the sharing is uniform. In fact, even if the secret k hidden by the smpc_biased_rng function is uniform (when at least one party is honest), its sharing may not be so in presence of a malicious party. Nonetheless, smpc_unbiased_rng returns to each party a share that, combined, gives the same secret k as the shares returned by the first call to smpc_biased_rng. Thus, it has the same flaw: it is only taken between 0 and \(2^{68}\).

We will now explain, without going in depth, how does the attack works from here. For more details, you can check this article by Breitner and Heninger. The fact is that in (EC)DSA when the \(k\) value (often called a "nonce" because it must be used only once) is not taken uniformly at random in all the possible values, it's possible to apply a class of attack based on a lattice representation of this problem. 2

In our case, for each signature, the expression of \(s\) can be seen as a modular equation. In smpc_trace.log we have different signatures, with different \(k\)s. Thus, our problem can be reformulated as a system of modular equations, one for each signature. Since it is underconstrained (one \(k\) and \(x\), the private coefficient, both appear in each equation), there are multiple valid solutions to this system and we can't just solve it using regular linear algebra. But we have another information on the values of the different unknown \(k\)s: they are really really small (between 0 and \(2^{68}\), in a space almost \(2^{188}\) times bigger).

From the private key \(x\), we can use the script get_flag.py given by the authors of the challenge to get the following flag: CTF{weak_RNG_strikes_back_again}.